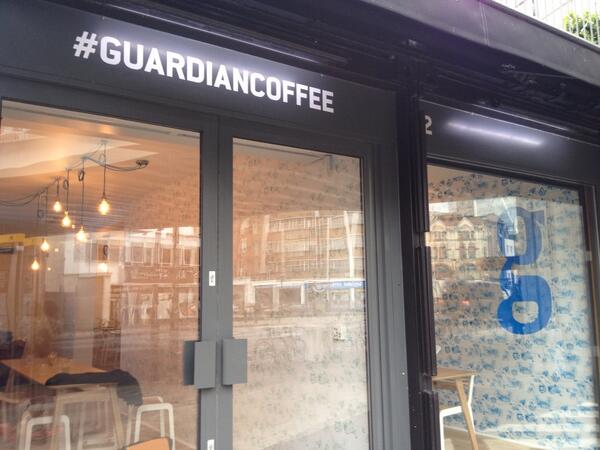 As a big fan of proper coffee, infographics and the painfully hipster Shoreditch technology scene I have to admit being pretty intrigued by The Guardian’s new #GuardianCoffee venture.

#GuardianCoffee is ‘a single site operation which is both a coffee shop and a space for journalists to work in’.

According to those who have seen the new space first-hand there are ‘infographics everywhere, iPads built into the table providing data-driven journalism and not a newspaper in sight.’

#GuardianCoffee is indicative of the experimental approach The Guardian is taking when it comes to the journalism industry and broadly follows with their ‘digital first’ approach. Alan Rusbridger has previously admitted that the traditional business models for journalism ‘no longer add up’ and it is widely known that the Guardian and sister paper The Observer are both loss-making.

Inevitably, the coffee shop has already been subject to a number of jokes and puns on Twitter but it is at least reassuring to see a media title experimenting with revenue-generating ideas rather than simply hiding behind a paywall that consumers can so easily circumvent by finding their news and information elsewhere.

It remains to be seen how successful the #GuardianCoffee experiment will prove to be and truth be told it feels more like a social-media driven brand building exercise rather than a genuinely commercial idea. Even so, it’s definitely a fun experiment and a nice idea.

In fact, I think we should follow the Guardian’s lead and establish our own #MKCoffee in Kelham Island. We’ve got the iPads, infographics and cool location, but we might need a slightly bigger and more sophisticated coffee maker than the one-cup cafetierre on my desk…